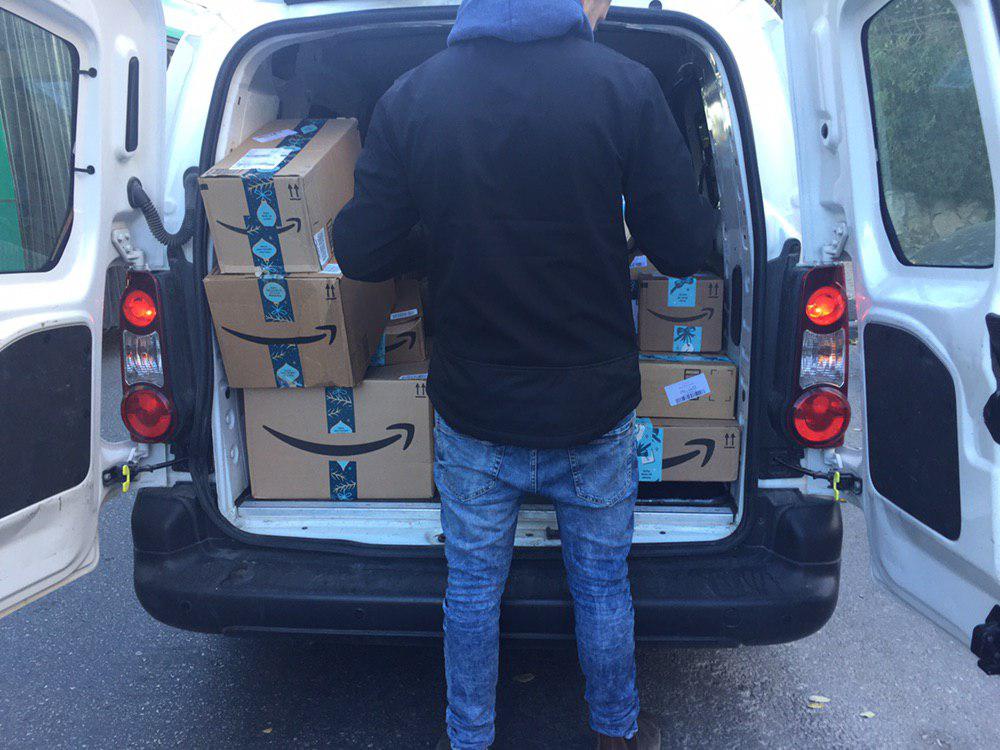 Israelis have rushed to take advantage of Amazon’s introductory free delivery offer over the past 6 weeks. Trouble is, the local postal service is proving unable to handle the pace

It’s been 22 days since I made my Amazon order to Israel, which included ten pairs of boys’ socks, five short iPhone cable chargers and a bamboo charging station that doubles as a multiple devices organizer.

The socks showed up within about two weeks, but the other two items are missing in action. According to my Amazon order page, my package may well be lost.

It doesn’t bode well for my budding relationship with Amazon in Israel, although Amazon did recommend that I ask for a refund. But my missing package isn’t entirely the company’s fault, either.

When the online market behemoth unveiled its site in Hebrew on November 11 and offered free shipping to Israel for orders over $49, it was clearly trying out the Israeli marketplace.

Israelis, no strangers to online commerce, began buying in droves. There were English-speaking immigrants, accustomed to a life with Amazon back in the US and UK, who were heading to Amazon to order toilet paper, garbage bags and kids’ games for Hanukkah. Native-born Israelis, on the other hand, hunted for other kinds of bargains, sourcing sneakers, sports equipment and electronics that can be costly when imported to Israel.

The problem was how to deliver the goods.

According to local lore, when Amazon asked for bids for mail order companies to handle its packages in Israel, Israel Post offered the lowest price, and won. But it seems to be having problems dealing with the wave of packages that has come its way.

“It’s crazy, we’re overloaded and we’re way behind,” said Amir, a staffer for Israel Post who recently made a delivery to my house.

Amazon Israel will not comment on any of its operations in Israel.

Israel Post would not comment on its bid for business with Amazon, but stated that the company is “dealing with unparalleled activity in the logistics market, as two packages are received every second by the postal service.”

The Israeli postal service more than doubled the number of packages it receives and delivers, and will deliver 68 million packages this year, according to the statement. At the same time, complaints have not grown in the same volume as the packages, and the current period is particularly busy.

Israel Post recently told Channel 12 that this month has been the busiest month of its year and that it has added 100 extra staff members, as well as more manpower to staff its phone lines.

(I wasn’t able to get through on Sunday, when I tried to track my package.)

According to conversations held with postal workers and corner store proprietors who act as hired intermediaries for Israel Post, the national postal service simply can’t handle this kind of package overload.

“We’re not organized to handle this many packages,” said a postal worker named David at the main post office in Givat Shaul in Jerusalem. “Look at this,” he said, pointing at cages piled high with packages. “It’s never been like this before.”

Israelis have long been ordering online, from UK retailer Next and Alibaba, the Chinese equivalent of Amazon. But the recent free-shipping offer from Amazon has upped the online retailing game, as locals flock to order items that are hard to find, or hard to find affordably, in Israel.

The delivery plan is the more complicated part of the online ordering package.

Mom and pop stores like Shachar Amsallem’s corner grocery store in Arnona, Jerusalem, have been signing up to receive packages for the Israel Post for the last two years.

As the public postal service privatized, it closed more of its post offices, yet had to find a solution for processing the packages that are being delivered each day.

Shachar Amsallem, who owns a small grocery store, has been in the package delivery business for the last year because of the extra income it brings in (Jessica Steinberg/Times of Israel)

Amsallem’s Makolet Shachar is one of many corner groceries, lottery shops and neighborhood stores in Israel that now take on the role of concierge, earning NIS 1 on each package they receive.

Amsallem figured that he processes about 1,000 packages a month, and some 10% of those customers tend to buy something when passing through his small but well-stocked store.

“For me, it’s about offering a service to my customers, to the people from around here,” he said. “It gets them to come in here.”

Still, it’s been a frustrating month, said Amsallem, with a tremendous number of packages. And Israel Post, he said, has been doing a terrible job.

“Israel Post is the cheapest, and the rumor is that’s why Amazon is working with it,” said Amsallem.

Israel Post “did okay with Next,” when the fashion retailer stepped up its Israel online operations earlier this year, he added, “because they clearly gave Next packages priority.